Being under criminal investigation is a nerve racking experience, but on the brighter side, the good thing about an investigation is that often times a good defense lawyer may be able to keep prosecutors at bay by reaching a non-criminal resolution or, if that is impossible, to take early proactive steps to minimize the client’s criminal exposure.

Norman Spencer Law Group PC is a boutique New York City criminal law firm with over 70 years of combined experience dealing with all sorts of criminal investigations and prosecutions in state and federal courts. Our top criminal defense lawyers deal with targets of various investigations on a daily basis and we know how stressful these times can be for our clients. We also know what to do to provide a compassionate but firm defense. Our primary goal is not to “win every case” as some other lawyers say, but to help our clients with getting over these trying times and give them the chance to start again with a clean slate after we reach the most optimal conclusion of their matter. 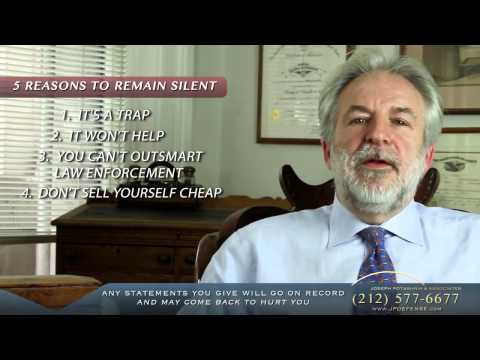 Criminal investigators employ different techniques with the same purpose to get information. Anything you say to them, any document you provide, may and probably will be used against you. You have no obligation to discuss anything with the investigators and it is your right to consult with an attorney before you decide what to do.

Four reasons not to speak with police

So, a police detective or a government agent came to your house, flashed his badge and asked you if would answer some questions. Or, you came home at night and found a business card that says ?Special Agent Jones? please call me.

If you’re reading this, chances are you’re a target of some government investigation and you’re asking the same question that thousands of others in your place have asked: What do I do?

Our advice is: NEVER SPEAK WITH THE POLICE OR OTHER GOVERNMENT AGENTS. Here are five reasons why not.

No detective wants to speak to you because they have nothing better to do. Investigators are very busy people with huge caseloads. If they want to talk to you, it means that something has triggered their interest. It means that you are already a target of investigation. You can assume that they’ve already done their homework and know a lot about you. So, you will ask: why do they need an interview? The answer is – to get your confession. They may or may not have hard evidence against you, but if they get your confession, it will be very difficult for you to defend yourself later.

The second reason is that talking to the investigators will not help you at all. No matter how smart you are, no matter how honest you want to be, it won’t help. Why? Their job is to investigate crimes and put people in prison. If they’ve decided to arrest you, they will arrest you regardless, but it’ll be much worse for you and the prospects of your case if you make any statements to them before they arrest you.

3) YOU CAN’T OUTSMART THEM

Let’s say you believe you are innocent. You think that just talking to them will help you understand what they have against you. Think again. First, you really don’t know what they are after. Second, you never know what could constitute criminal conduct. There are literally tens of thousands of federal criminal laws on the books. Things you didn’t even know were crimes, could send you to jail if you’re found guilty. Imagine playing poker with someone who can see all your cards but you can’t see theirs. Imagine stepping into the ring with Mike Tyson. You are dealing with professional interrogators who have interrogated thousands of people just like you. They know much more about you than you about them. After talking to them for a few hours, do you think you won’t say anything that will incriminate you?

Reason four. If somebody wants to buy something they really want and only you have, you would sell it to them for a good price. If you have information they want, don’t you think it would be better for you to sell it so you get something in return? Your lawyer can negotiate a better deal for you if there is something to trade with the prosecutors. This could involve anything from immunity to settling for a smaller fine, a misdemeanor charge instead of a felony or less time in jail. But what is left to trade if you give up all you have without getting anything in return.

DOES IT EVER HELP?

There is only one way you should ever speak with investigators and that’s on advice from your attorney. See, an investigator’s job is just to collect the evidence and give it to the prosecutor. They don’t call the shots, the prosecutor does. In some investigations, especially in federal cases, speaking with the government may be a lifesaver but…you should never try to negotiate your own terms. Your lawyer will arrange for a special meeting with the prosecutor for that. The prosecutor and you will sign an agreement that will guarantee that your statements won’t be used against you in court. We call this a proffer. Proffers are not always advisable, but it the only time it is relatively safe for you to speak with the government and only your attorney can determine whether it’s the best thing to do in your particular case.

If you believe you are a target of a criminal investigation, call our New York City criminal lawyers today at (212) 577 6677 to set up an immediate consultation.

Other Investigations and Audits